Getting Press in Orlando, Florida!

This past week our students from Harmony High School delivered checks to several of the organizations they selected after completing the Main Street Philanthropy course!  Along with them for the ride was David Breen, a reporter for the Orlando Sentinel.  Following is a nice piece that David wrote about the program.  Check it out!!

Harmony students learn how charity can make a difference 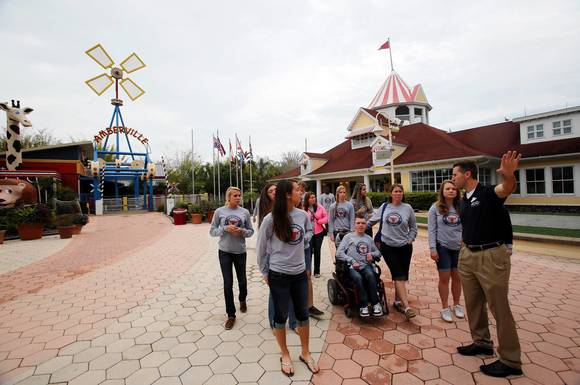 Pat Filippone is in the business of raising money in her role as executive director of Habitat for Humanity in Osceola County. But on Thursday, business gave way to emotion as she thanked a group of high school students for choosing Habitat as the recipient of a $1,200 grant.

“This will be multiplied one-thousandfold,” Filippone told them tearfully.

The students are members of a new program at Harmony High School that’s teaching kids how to make a difference through charitable giving.
Over the past several weeks, 21 students at the school near St. Cloud have researched the work of various charities and heard presentations. Now, thanks to a private donor, they’re handing out checks totaling $6,000 to the causes they chose.

On Thursday, the class traveled throughout Osceola, giving donations to Habitat, the Pawsitive Action Foundation and Give Kids the World. Other groups, including United Arts of Central Florida and the Christian Service Center for Central Florida, will get checks next week.

The class is the brainchild of Harmony financial planner and attorney Scott Farnsworth, 60, who counsels wealthy families on money management and charitable giving. Money for the grants the class is distributing came from one of his clients, businessman Ed Verner of Plant City.

“This is the way that we can actually change the world,” Farnsworth said. “It’s pretty hard to do it one family at a time, but if you can get a roomful of kids …”

The first step for the students was to match their personal passions with a compatible cause.
Payton Poulin, 18, decided he’d support Give Kids the World, which hosts families of children with life-threatening illnesses while they’re visiting Central Florida attractions.

“I’ve seen what they’re doing for disabled people,” said Payton, who has cerebral palsy. The class, he said, “taught me a lot about who I am as a person and what I need to do to be a better citizen for my society.”
Seventeen-year-old Brianna Pesce said she chose to support the local chapter of Habitat because “it just seems like the money would help a smaller charity more than a larger one.

“It’s just inspiring that they help the people who don’t have what others have,” she added.

Travis Carter, 18, chose the Clean the World Foundation. Its mission is to recycle hotel supplies such as soap and shampoo, sanitize them and ship them to needy countries. He was amazed to learn that something as simple as hand-washing could sharply reduce the number of children who die of hygiene-related diseases every day.

“You need to donate where your heart is,” he said.

Once a week, Farnsworth visits Eric Hansen’s government class. Hansen’s students are all part of Harmony’s student government, and they’re no strangers to service. Each Friday, they do projects around school, from serving food in the cafeteria to weeding to cleaning windows, Hansen said.
But through the philanthropy class, Hansen has seen the kids grow — interacting with charities’ boards of trustees and gaining confidence and maturity that will serve them far beyond high school.

“They carry themselves differently,” said Hansen, 42. “They’re not just caught up in that texting-video game culture.”

In between typical teen talk about who sweats too much and which teacher is “being a butt-head,” these kids throw around phrases like “quantitative and qualitative analysis” and “990 tax form” — the IRS form for nonprofits that they’ve learned to decipher in class.

The program is unique in Central Florida, but Farnsworth and a partner in California are looking to spread the word through Main Street Philanthropy, a nonprofit they formed. Farnsworth hopes to have three classes in Osceola schools next year and is looking to recruit “ambassadors” — financial professionals like himself — and donors to take the classes nationwide.

One big lesson the students have learned so far is that philanthropy needn’t be limited to the wealthy.
“I realized that you don’t need millions of dollars to make a difference in your community,” said Olivia Porter, 17. “The little that you can give can go a long way for charities and mean a lot to them.”